With prejudice with an orange 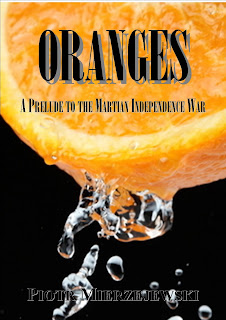 What looks like an orange, but isn't really an orange? As questions go, that was pretty lame. But never mind. My friends tell me that I tend to ask stupid questions.

To your right you'll see a cover stand in for Oranges: A Prelude to the Martian Independence War, a novella that was the result of reading too much Robert Heinlein, and having a very healthy love affair with science fiction as a whole.

The story is about the prelude to war between Earth and her colonies on Mars. Okay, so it's a cliche premise but frankly so what... it's what I want to set this premise in. If all goes well, it should be available either through Smashwords and Amazon in the next month or so (unless I will try to submit it somewhere).

Either way, I'll keep you all updated on which way I go.


I would like to say that I have submitted With Prejudice to a potential publisher last weekend, so am waiting to hear. They said six weeks, so just need to be patient. 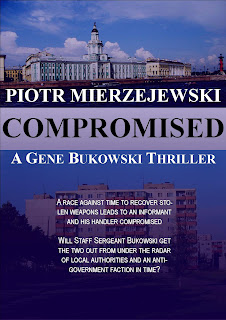 While waiting to hear if they want the story, and I'm hoping they do, the best thing for me to do (other than to work of course) is to simply write. The mock up cover to your left is the result.

This little gem started at 7,000 words or thereabouts, and is my next work in progress in addition to the one above. Compromised is planned to be a longer piece, but have no idea on how long it'll actually be. All I can tell you is that it will be a near futuristic setting, and that it will be featuring my main man Gene Bukowski. The premise to this story is that our hero goes in to discover if a particular informant and his handler had been compromised, and if he could get them out. At the same time he has to determine if a cache of stolen next-generation infantry weapons can be recovered from an emerging faction in Russia hell bent on toppling the government.

For those of you who had read Exit Strategy, let me just say that Compromised is slightly different (with much of it written into my submission). Gene Bukowski essentially had a facelift and a re-boot, and now he's a two year veteran of a clandestine arm of an evolved version of the International Security Assistance Force whose area of operation had expended not only Afghanistan, but practically every troublespot on the planet. You could say that the ISAF in my story has become the preferred command and control agency for peacekeeping co-ordination. The other thing is that the story is set sometime in our century, but far enough for lunar settlements and orbital colonies.

Personally, I think that this would be a vast improvement from what you have previously seen.