I want to talk to you about my progress on working With Prejudice, which is kind of related to Snapshot (which I haven't decided what to do with it just yet).

Originally intended to be a direct sequel to Exit Strategy and Across the Board, this current work in progress is just that; a WIP. As I said to one of my friends in Seattle, it'll be a spiritual spinoff to Bukowski's little saga. It'll be near future, action packed and hopefully with a few twists and turns to keep the reader on the edge. Currently the initial draft is just over 67k words.

Aptly named if you ask me

With the following tagline:


A young reporter determined to prove herself, only to stumble onto a story that would further her career.
A veteran operative, one of the best the Division has to offer, has been told to keep his head down.
A snapshot of two people becoming reliant on one another.


The current project is a spiritual offshoot of Special Projects.

The protagonist is this premise is Jonathan Crowley, or Jack to his mates. A former New Zealand Special Air Service operator recruited into a clandestine branch of the multinational North Atlantic organisation. Right now am envisaging him more along the lines of a younger Michael Garibaldi from the Babylon 5 series. Why him I hear you ask? Well, I was a big fan of the series when I was younger. Plus I was impressed with how Jerry Doyle portrayed the character, and still am to this day. After all, there was a character that felt real and with his own unique set of problems. It is that that I'd like to see in Crowley's character development.

I think I was a little too quick in dismissing Bukowski.

Or, more accurately the whole idea.

When I wrote last time I was fed up with a few things going on, with a plotline not cooperating and generally giving me grief to a few projects misbehaving themselves at work. So yes, I think I was allowed to through a hissy fit.

Am I really going to give up on Bukowski?

As I mentioned in my last post, he and I go way back.

What I will say however is that I like the idea of clandestine agency answerable either to the UN or a multinational security alliance running about saving the world from itself, as I've been brought up on such movies as James Bond and series like the old Mission Impossible and the much newer NCIS, NCIS Los Angeles, Spooks, Water Rats and a few others. Not to mention books by the likes of Coonts, Clancy and a few others.

I think Bukowski and the resulting Exit Strategy was a proof of concept that I can write something similar. Now to put it to practice.

To be honest I haven't got a clue. When I first started with Bukowski, I was relatively new to the idea of writing. Well, kind of. My first story that I've ever written from beginning to end involved ended up being published in my high school's end of year magazine. But it wasn't until I came across such awesome examples of story telling in my role-playing game via email that I wanted to actually write a story.

That story had been Bukowski.

In my attempt in writing my great masterpiece, that I was to unleash on a publisher who will instantly snatch it up and make me millions of dollars, I have dragged Bukowski through various incarnations and locales: from the tip of Olympus Mons, to the regolith deserts of Earth's moon and finally to Cahora Bassa as you see in Exit Strategy. The truth is, I'm getting the feeling that I need to put Bukowski to bed and let him go. After all, he has been my primary character for as long as I can remember. He needs a rest.

I want to move on.

Not that I'm suggesting that Bukowski is preventing me from moving on. Far from it. The good sergeant has taught me some valuable lessons around writing, character development and world building. He let me experiment on him, whether it be via first person narrative to collaborative writing (and I have to thank both Nigel and Barb too), to everything else.

I just want to move on, and play with other characters and story ideas.

Bukowski and Adams, along with Yamakawa and Heerdan will remain where I have placed them; in Special Projects. Besides, I may have one or two stories left in that series, and more may be written as freebies.

But I will be focusing on new stories with other characters populating them.

So the other day I wrote about going to seeing ballet, and absolutely loving every second of it.

Last night I went to see a show being done by the City Choir Dunedin, called Nature's Bounty, at the Knox Church. The drawcard for me was that it was supported by the Southern Synthonia. There is something about an orchestra that lately seems to have an affect on me, and am slowly discovering the likes of Chopin and company.

The other bonus was that it was held at Knox Church, one of the icons of Dunedin, dating back to 1859 and with a pretty impressive history in its own right.

As a budding historian, I had always wanted to see the interior of the church but access to it is understandingly limited. So when family friends suggested we check out the choir's latest concert there I figured "why not?".

So of we went.

Okay, let me start of with saying that Knox Church is presbyterian. I think that the thing that struck me most was the simple nature of the interior. It was plain really, with the windows being the predominantly decorative parts that I could see despite the awesome exterior. Was I disappointed? Well, a little. But it is my understanding that many presbyterians weren't into the whole pomp and ceremony that catholics and anglicans were, but I could be wrong (please correct me if that is the case). Still, it was a monument to Dunedin's past and feel richer for seeing the church myself.

As for the performance itself? Well, it was okay. But this choir was no angels singing, if you catch my drift--but they were still enjoyable to listen to. Plus the experience was made sour when one of the choir members literally told my mum and I we were sitting in the wrong in the wrong area despite being ushered to the "wheelchair" section, due to it being reserved for his elderly guest who too was on a wheelchair. My mum nearly had a fit when the choir member dismissed her claim while ignoring me by stating that "there are disabilities, and then there are disabilities". Personally I couldn't figure out what he meant by that off the cuff statement, but hey... takes all kinds, right?

Have you experienced something new that you've wanted to try?
- April 03, 2013 No comments:

When I first started writing Bukowski's adventure, the setting and premise looked nothing like what you see in Exit Strategy. 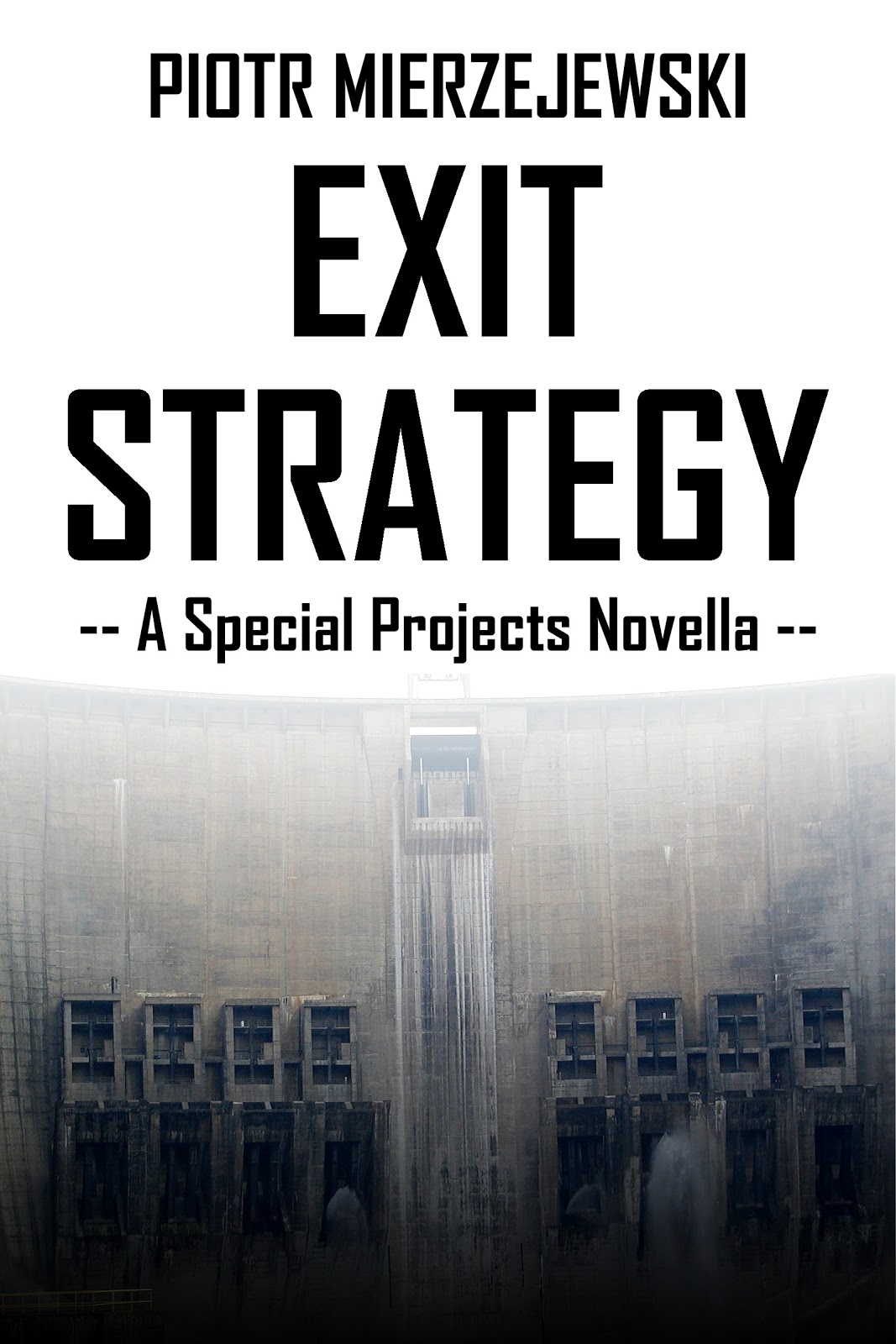 Yet, as with anything, the idea grew. Between feedback from writing friends Barb Caffrey, her late husband Michael, and the likes of N.M. Gillson to name just a few, I had been encouraged and pushed to do better.

The novella had been available through Smashwords and Kobo, and Barnes & Noble if memory serves me correctly. Four stories had been sold, until I figured that it would be a good idea to just make the story and the accompanying vignetta serial as free downloads. Better to have a readership than zero sales, at least that is my belief. Once I figure out how to place my stuff on Amazon that may change, but am sticking with Smashwords for now because... well, it suits my purpose for now.

But what is the bestest part right now, on this Easter Monday? I checked out Goodreads, where I have my story placed as well, and Kobo. I saw comments from buyers and stars, indicating if they liked it (five full stars) or hated it (one star). Out of the four who purchased my book, the vote was evenly split between two sets of three stars and two sets of five. Yippee, right? Equally, I had feedback. This is what two of them had to say:


"I thoroughly enjoyed this novella. It's full of action and conspiratorial intrigue. If you love military fiction and science fiction, or love when the two make sweet sweet love -- this book is for you. What are you waiting for?"
-- Anth, Goodreads reviewer
"Awesome book, from start to finish. Outstanding dialogue, graphic scenes and makes you feel you are actually there.

Piotr is a writer to watch out for in the coming years."

Only problem with this story is...its too short!"
-- N.M. Gillson, author of Black Donald

This blog is no exception.

When I first started this blog it was specifically designed to follow my journey in fitness. I had another on writing too. The thing is, life has gotten busy and one of these had to go. Not that I've stopped with my fitness endeavours, far from it. Neither had I stopped writing, just check out here. It just means I will have a nice blog that covers topics across the board. Yeap, simple really.