Good morning one and all, and welcome to the teaser of Dragoon 2-2, as seen below.

The flight deck was a hive of activity.
The lord commander in charge of the spacecraft carrier’s fighter contingent was adamant in maintaining cover for the flagship. No one knew how high into orbit the natives could reach. Not enough time had been spent on finding out.
Political expediency. Thought Tuvuius nar Nasom as he saw several techs work on one of the aging fighters. We barely picked up this world on our scopes, and the Council pushed for settlement. Bloody idiots, the whole lot of them! Not that he was present in the meeting, Tuvuius was not high up in the ranks to warrant an invitation. Still, he knew those who attended.
Despite caution advised by the shaman, the Council pushed for settlement. Their reasoning was understandable; the ships were old, the oldest dating back to when it served in the homeworld defense force many hundreds of cycles ago. Resources were low, too, as it had been several generations since they mined asteroids and moons. Most importantly, they were losing knowledge.
We can only blame ourselves.
Tall and broad, Tuvuius nar Nasom liked to think he did not fit the standard mold of what a kaha’asi male of noble birth was like, especially one who had just reached his twentieth cycle. For one, he flew fighters. For most nobles, even those born to the beta of high born as his father, flying was below them. Nobles hunted and mated, and had armies of yeomen and freemen and slaves to tend to their needs. Tuvuius believed in being active.
“My liege.”
The deep rumble of his flight chief and engineer penetrated through his musings, and Tuvuius turned. “Yerfdes?”
“You are needed in the throne room.”
Tuvuius blinked. “Do you know why?”
“I do not know my liege.”

*
The throne room was a study of organized chaos.
To Tuvuius, it may as well be a whole world away. Blinking hard against the darkened red glare of the compartment’s interior, he paused and lifted his head to sniff the air. It was stale, much like the rest of the ship. But that was where the similarities ended.
Sergeants and more junior ranked yeomen crewed every station, with more senior aristocrats overseeing them. Tuvuius sneezed.
“And you are?” demanded the nearest of the sentries, almost invisible in their black shoulder pads, breastplates, and full helm.
“Tuvuius nar Nasom,” the young kaha’asi male began, eyeing the apparition before him. The guard was not the usual sergeant, who commonly served in a specific squadron. The big male was from the Black Legion, the personal army of the late Admiral Yllus nar Nayyar. Upon his death, they and the Admiral’s riches went to Tuvuius’s father.
Since that day, the legionnaires served his father with fierce loyalty.
Like others, Tuvuius had heard the stories. The legion was notorious, taking their task of protecting their master and commander very seriously. He had heard stories of legionnaires ripping into any kaha’asi who took one wrong step towards whomever they were protecting. The only reason why none of the legionnaires pounced on his father was that Nasom nar Yaako had managed to call out a challenge for ritual combat, something the admiral could not refuse. As it was, Yllus died in battle, even if it had been a hopeless cause for the aging kaha’asi male.
“Stay here,” the guard murmured and grunted at his fellow guard.
The other black legionnaire took the hint. Tuvuius waited. He may be the firstborn to his father’s beta wife, but he was no fool.
“Come,” the second guard announced as they approached, turning around.
Tuvuius followed after exposing his neck to the first guard in thanks.
“My son.” His father’s tone was firm, yet Tuvuius thought he heard a degree of paternal pride resonating from the squadron commander.
“Father.” Tuvuius kept his distance, mindful of his escort and the two legionnaires that flanked his father’s station. “I wanted to thank you for bestowing upon me the new rank. I will not disappoint you, nor the squadron.”
“You have earned the title on your own merits, my son,” Nasom countered.
“I have killed a fellow kaha’asi for the privilege, father,” said Tuvuius. “Surely, there must be a better way. From what I have read, Kedar nar Suhala was a very competent fighter pilot and had been well respected.”
Nasom looked at his offspring thoughtfully for a long minute, only to sigh. “I am well aware of that, my son. Kedar and I had earned our lieutenantships at the same time, and I knew him well. However, we had to adhere to tradition. Your brother had opted for you as his wing commander, not Kedar. There was room for one.”
The young kaha’asi male grimaced. He had heard the same statement, or a variant of it, in one form or another for many a cycle now. The older Tuvuius got, the more he started to know why things were as they were, especially after finding out that it hadn’t always been like this.
Tuvuius was going to say something to that effect, but a commotion interrupted them. Father and son turned as one.
“Captain, I do not appreciate tantrums on my command deck,” declared Nasom.
“My apologies, liege, but we just struck something,” the captain responded.
“Orbital debris?”
“Or a satellite,” offered the captain, looking perturbed.
Tuvuius couldn’t help himself. “But I was under the impression that its sound tactical doctrine to shoot down orbital satellites . . .” His voice petered off as both his father and the captain, along with a trio of black legionnaires, eyed him. “I assisted in the transcribing of the council meeting, father,” he said, turning his attention to Nasom.
“That is the task of the shaman, my son,” his father reminded.
“Yes, father.”
Nasom sighed, shook his head, and turned to the captain. “Bring us back into orbit, Captain, and instruct our escorts to clear the area of anything artificial.”
The captain nodded and turned to relay the orders.
“As for you, Commander nar Nasom.” His father turned to regard Tuvuius.
“Commodore nar Yaako?” the young kaha’asi male replied, just as formally.
“You have your brother to serve. Do so with honor.”

Part of a scattered amphibious task force off the coast of the Philippines, the Chinese landing ship Yimena Shan smashed through the incoming waves. It was late evening. That time was dark blue intermingled with whiffs of lighter blue as daylight retreated. Shadows danced against the deck as a voice called out orders over loudspeaker and klaxons wailed, and lights flashed on and off. Chang Lian would have been quietly mesmerized by the cacophony of blues, shadows, and wailing klaxons if she were not already high on adrenaline.
She was in a rush, stepping out into the open, the embedded reporter, and nearly collided with a marine. More marines rushed by. Chang almost lost her balance, only to be caught by a junior naval officer.
“Thank you,” she breathed.
"Miss Lian, please gather your gear; we are disembarking," the young officer said.
She watched as more marines swept past her, scrambling up the nearest ladders that led up to the deck that held the landing craft. “What’s going on?” demanded Chang as she turned her attention back to the ensign.
“We’re landing in the Philippines, evacuate civilians!” the ensign replied before scurying off.
She re-entered her room, quickly donned her lightweight body armor and her favorite baseball cap and slung her backpack on her shoulder with her assigned combat helmet attached to the webbing. They rushed to the deployment deck. Once topside, she added a bright orange life jacket he handed her. She donned her helmet, tucked her baseball cap away, pulled her camera from the pack, and turned it on.
"Admiral Huang has just ordered all the marines off the Yimena Shan," she told the digicam in her hand, shifting it away from her, and then recorded the area around her to showcase the rush of activity. The built-in transmitter uploaded her comments automatically onto a cloud account, linked directly to her producers back in Auckland.
Marines surged by her, boarding one of six landing craft. Lian and her guide followed them, and she noted that someone had painted the Chinese characters for 'River Oxen' on the hull. Finally, she was helped aboard by the ensign.
"What's going on?" she asked a sergeant, pointing the digicam at him as she tried to steady the camera.
"Command ordered us to defend Laoag City!" the sergeant responded, eyes wide with resolve and excitement.
Her eyebrows shot up in surprise. It was common knowledge that China and the Philippines had been on the verge of war before the aliens descended from the heavens, two and a half days ago. China and the Philippines had put aside their border disputes because of the aliens' threat.
The aliens didn't differentiate between countries as they struck all the cities, military bases, and combat units on maneuvers, regardless of what national flag they were sporting. The opening salvo seemingly targeted surface warships. How the amphibious combat group managed to stay afloat this long had been a miracle, with some of the crew wondering when the aliens would strike. 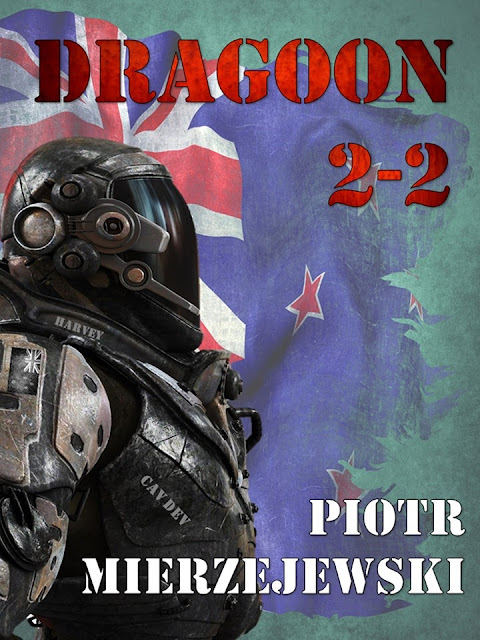